Earhart Productions of Waco has purchased the Hill Country Classic Car Swap Meet from the Fredericksburg Vintage Car Club. The meet had been produced by the club for the last 38 years at Lady Bird Johnson Municipal Park in Fredericksburg Texas.

Earhart Productions produced it’s first classic car event in March 1980 at the Heart-O-Texas fairgrounds in Waco. The event was called Earhart’s Auto Expo and featured a car show & swap meet together. Those Expos ran for 10 years at the Fairgrounds in Waco. In 1991 they were moved to the the Texas Ranger’s old Arlington Stadium and the name changed to “Dallas” Swap Meets. In a few years the meets became one the largest collector car event in the Southwest. In 2002 the Rangers, who had built the new Ballpark in Arlington, decided to developed the parking lots the Dallas meets were held on. This forced the Earharts to move the events to LaGrave Field in Ft. Worth, home of the Ft. Worth Cats Baseball team. The name was changed to “D/FW” Swap Meets & they ran there for 9 years until the Cats went into bankruptcy at which time the meets moved again to Lone Star Park in Grand Prairie were they continue prosper & grow. Lone Star Park is the major horse racing track in Texas & is located on I-30 between Dallas & Arlington.

The first old car event produced by our founder Dean Earhart, was a car show in the summer of 1979 at the Robinson Plaza Shopping in Robinson Texas.

This show was held to draw lots of people to the new center he and partner Acy Cooper had built the year before.

Most of the cars were from Dean’s collection of Corvettes and his young children Marcy, Jancy & Jason ran the free cold drink stand. In March of 1980 the first Auto Expo, a car show and swap meet, was held at the Heart-O-Texas Fairgrounds in Waco with thousands in attendance.

The Auto Expo’s were held thru out the 80′s in Waco, Austin, Belton & Bryan-College station. In the summer of 1984 Dean started Publishing Auto Expo Magazine, a magazine that covered the collector car events in the Southwest. It was sold in mid 1990 to Collector Car Magazine in California. Several Classic Car Auctions were also produced in Waco & Las Vegas in the late 80′s by Earhart Productions. While recovering from surgery and a divorce at his Mothers house in 1991, Dean sold his last car, a 1973 Ford Torino G-T for $1,250. Got on the phone and made deal with the Texas Rangers Baseball Team to rent their parking lot on I-30 for a swap meet the 2nd weekend of November. Dean sent them a $1000. deposit to hold the lot. Over 750 spaces were sold at this first event.

This event became the nationally known “Dallas Swap Meet” and grew to 3000 spaces filled 100s of collector cars 1000s of parts in the late 90′s.In 2002 the Ranger owners developed the swap meet area into an office complex causing us to move. In 2004 this event was moved to LaGrave Field in Ft. Worth & the name changed to D/FW Swap meet were it prospered and drew huge crowds of old car buffs for 8 years.  In 2012 the meet moved to a much larger & better site @ Lone Star Park in Grand Prairie Tx. Lone Star Park is located  between Dallas & Ft. Worth on I-30 & N. Beltline. The DFW Swap Meet is the only large meet in the metroplex with both FREE parking & admission! 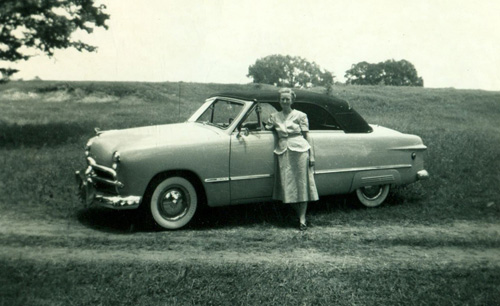 1948, Dean’s grandmother Minnie Earhart stands by his dad’s 1949 Ford Convertible. It was the lead car in the 1948 Christmas parade in downtown Mt. Pleasant, Tx. The first Christmas lights after World War II, to decorate the downtown square were hand made by a local service club in the Earhart’s garage on So. 11th St. his dad, Arlon Earhart was manager of Perry Bros. Five & Dime store in Mt. Pleasant. 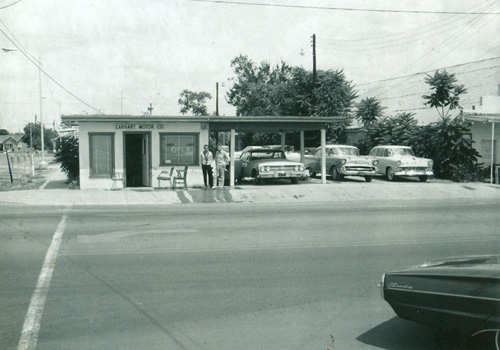 1980 Early “Auto Expo” at the Heart-O-Texas fairgrounds in Waco, Tx. 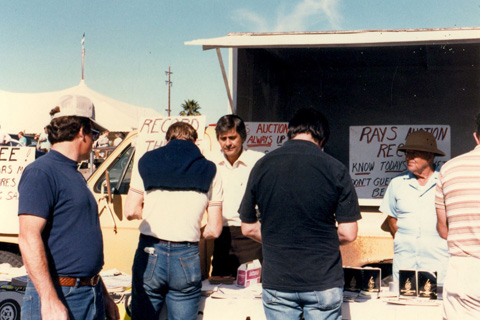 1985. Barrett-Jackson Auction in Az. Dean with Ray Utter of Shawnee, Ok. at the January sale. Ray took Dean under his wings and let him set up with him in his booth at auctions & swap meets across the USA all through the ’80s. He was truly a great mentor to Dean. Ray published Ray’s Auction Results & Collector Car Values for many years and was dearly loved by 1000’s in our hobby. Some of Ray’s Auction Results were printed in Dean’s “Auto Expo” Magazine.